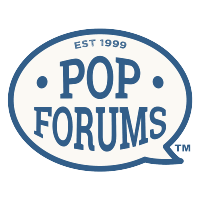 POP Forums v19 is a forum app for ASP.NET (formerly known as Core), used as the base for several sites maintained by the author, as well as a commercial, cloud hosted product. It’s a long-term commitment to great community. If you’re looking for the commercial hosted product and support for it, go to popforums.com.

This documentation is for the open source POP Forums project. For documentation about the commercial hosted product, visit support.popforums.com.

If you’re working with a version that isn’t v19, check the /docs folder in the source branch that matches the version you’re using.

Get a load of all the features.

Make test posts and try it out here:
https://meta.popforums.com/Forums

The project goals include:

To set it up, check the installation instructions in the Start Here section.

POP Forums v13 for ASP.NET MVC 5 is also available as a previous release.

Do you speak English and another language? We want to make POP Forums globally useful. Since v9.2, the app is easily localized. Volunteers have translated to Spanish, Dutch, Ukrainian, Taiwanese Mandarin and German, and we’d love help for additional languages. Drop Jeff an e-mail to jeff@popw.com for more information.

Found a bug? Add it to the issue tracker.